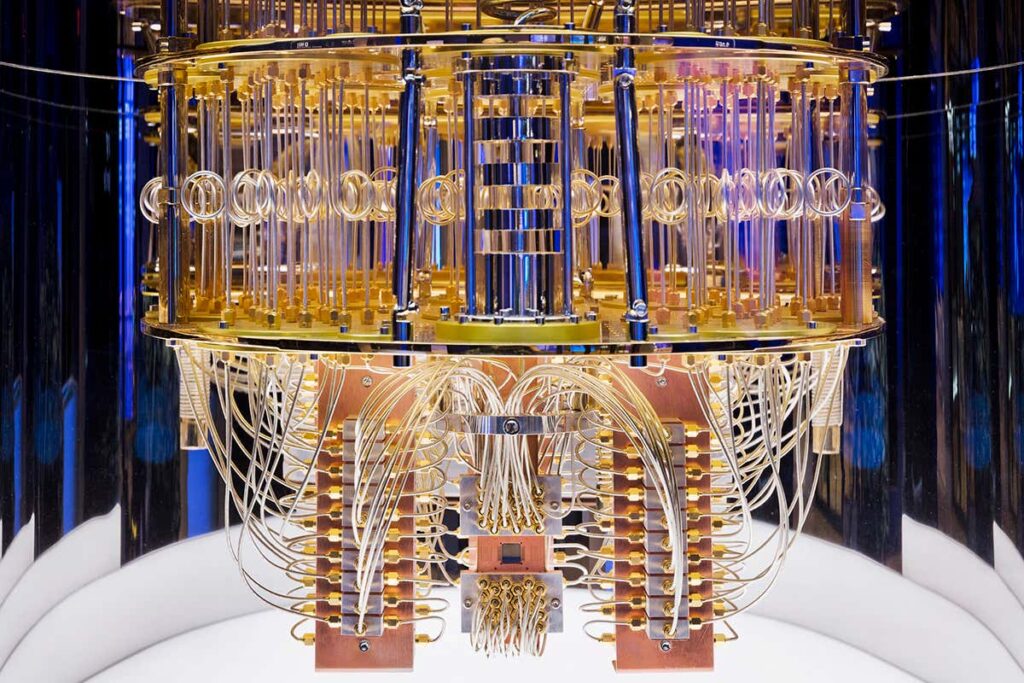 One of the most well-known applications of quantum computers is breaking the mathematical difficulty underlying most of currently used cryptography. As cryptography is fundamental to blockchains, we discuss how/if this poses a risk.

Before we begin, it is important to understand some of the types of encryption:

In symmetric cryptography data is encrypted and decrypted using a single secret cryptography key. This is one of the oldest and widely used encryption techniques. With regard to the encryption of the data, the process is conceptually very simple. If an individual wishes to send an encrypted message they would simply use a secret key to encrypt the file prior to sending. The same key would then be required to decrypt the file on the receiver’s end. Anyone who is in possession of the secret key will also be able to decrypt the message. Note that the message could be encrypted by different means, some examples being one byte at a time (steam cypher) or in units (block cypher). Below are some common types of symmetric encryption:

The advantages of symmetric encryption is that it can encrypt and decrypt large amounts of data quickly and is easy to implement. The biggest disadvantage is that it is based upon the use of a single secret key.

This technique uses mathematically linked public and private key pairs to encrypt and decrypt data. The public-private key pair is generated based on a mathematical principle called a “one-way function”. This principle dictates that the public key can be easily derived from the private key but not the other way around. All known (classical) algorithms used to derive the private key from the public key require an astronomical amount of time to perform such a computation and are therefore not practical.

The results of these properties mean that a series of qubits can represent many different things simultaneously.

The implication of this with regard to computation and storage can be highlighted by the fact that a standard computer can use 8 bits to represent numbers between 0-255. However 8 qubits can be used to represent the same set of numbers (0-255) simultaneously! A few hundred entangled qubits would be enough to represent more numbers than there are atoms in the universe.

Implications of Quantum Computing on Blockchains

Blockchains use the principal of asymmetric cryptography (as defined above). We have learnt that the ‘one-way-function’ dictates that it is appropriately difficult to derive the private key from the public key as this will require astronomical amounts of computing power. However since the publication of the quantum algorithm by Peter Shor in 1994, sufficient quantum computing power will in fact break down this difficulty and thus enable falsifying of digital signatures. With a focus on Bitcoin, we shall assess the types of addresses and the vulnerabilities of each to the quantum computing threat:

One interesting point to note was that the implementation of p2pkh was not as a result of the threat of attack, but more linked to resolving some inherent problems with p2pk, namely:

So to conclude we can state there is a very real risk of quantum computing attacks but these are solely isolated to addresses where the private key is accessible (i.e. early Bitcoin addresses). The implications are that a large amount of early Bitcoin which was thought to be lost forever due to misplaced keys, could in fact be brought back into circulation.