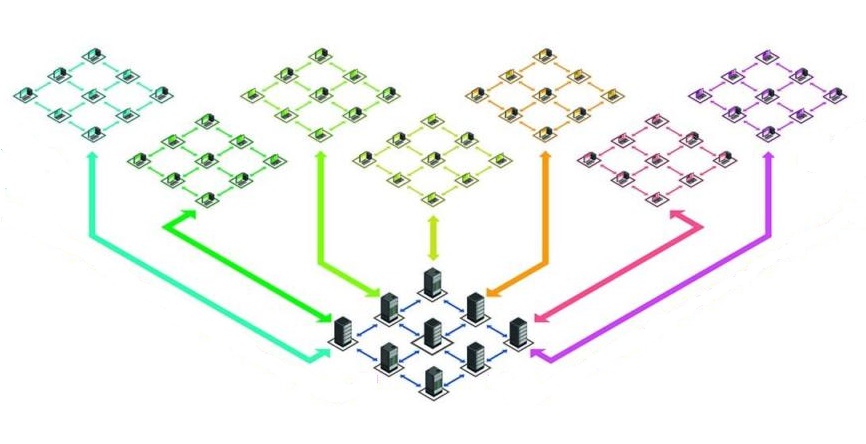 In this article we shall discuss the concepts of sharing (multi-processing) using the base cases extracted from Proof-Of-Work blockchains and then conclude with how CSPR is researching and developing their methodology for sharding.

Blockchains have to be able to grow exponentially without slowing. That means making it ‘scalable’. The below image illustrates how scalability is one of the three competing factors in optimal blockchain. Solving all 3 will result in a truly future proof blockchain. We shall discuss also how solving 1 of the 3 principals below, is often to the detriment of another principal.

As mentioned above, due to the fact that each node must process every transaction there will be an inherent limitation to the network. This comes about as the computing and load power on each node grow directly proportional to the growth of transactions on the network. Consider the below analogy:

In order then to increase throughput, we must split the workload among the nodes such that we can process transactions in parallel.

Sharding is a concept and technique used in databases for horizonal partitioning. It is where you separate the rows from one larger table into multiple smaller tables. Each new table (or partition) has the same schema and columns, but also entirely different rows. Likewise, the data held in each is unique and independent of the data held in other partitions. Database shards exemplify a shared-nothing architecture. This means that the shards are autonomous; they don’t share any of the same data or computing resource. The main appeal of sharding a database is that it can help to facilitate horizontal scaling, also known as scaling out. Horizontal scaling is the practice of adding more machines to an existing stack in order to spread out the load and allow for more traffic and faster processing. This is often contrasted with vertical scaling, otherwise known as scaling up, which involves upgrading the hardware of an existing server, usually by adding more RAM or CPU.

We can take the above and apply the same concepts to blockchain nodes. By splitting the population of nodes into shards (smaller groups of nodes within the population), we can then split the transactional workload among these shared to achieve parallel processing of transactions, thus increasing throughput. Each of the nodes within a given shard will only need to store and process the transactions allocated to that shard. The information in a shard can still be shared and everyone can still see all the ledger entries, however every node is freed from storing and recording data on other nodes. That allows data to be stored more quickly and is easier to find as its location is mapped on the blockchains.

You may be thinking now that in implementing sharding (scalability in our blockchain trilemma), we have actually reduced the security of the network…and you would be correct. The reason for this is that to maintain security, you need to guard against something called ‘Shard Takeover’

One upside to have every node record all transactions is that data is undisputable as there are as many copies and potential consensus agreements as there are number of nodes.

If for example we now create as many shards as there are number of nodes where each shard only records transactional data that it is processing, we have increased the throughput by a factor of the number of nodes, but have introduced massive risks. The reason for the risks is that there is now no copy of the data on any given node and so any corruption of nodes will result in permanent loss of data.

In the article so far we have discussed two limiting cases:

The below extract was taken from our AMA with the CasperLabs CTO Medha Palikar:

Daniel Kane has started the work on sharding – here are his initial ideas:

This should ensure that the transactions within a block are reasonably parallelizable, as the computation schedule essentially provides a mechanism for parallelizing the computation. Furthermore, this mechanism should produce the same results as if the computations were atomic with each operation being performed at some arbitrary time during its interval.

Because each block supports parallel  execution, should not affect security.